Powered by LootLocker: The game that pleased the Greek gods to win the $25,000 first prize at Together Jam

Brazilian indie developers SheePixel took home the top prize for their game, Xena: Trial of the Gods. In the first part of this three-part blog series, let’s get to know our Together Jam winners.

When a game jam meets iconic TV shows and films

Together Jam was an event created by Game Jolt, LootLocker and G4, and supported by NBCUniversal who, for the first time ever, unlocked their more prized IPs to the general game developer public. It ran in late June, 2022, and had a massive prize pool of $50,000. Our goal was to create a game jam that had never been done before, and we’d say we pulled it off.

The challenge was simple: choose one of five classic TV shows and movies, and build a game that pays homage to it. The theme was ‘strength in numbers’. Andrei Dilhe – one of SheePixels four-person development team – was immediately intrigued.

“We all received an email notification from Game Jolt,” Andrei said. “We’d participated and won an award for best GameLift usage in Game Jolt’s Spoopy Jam last year. Knowing that Game Jolt is a serious and trustworthy platform, we decided to join the jam the moment we saw it.”

For their classic IP, they chose Xena: Warrior Princess – but not because they were especially big fans. “We decided to let the artists have a stronger opinion on this topic,” says Andrei. “Our two artists have a very unique, ‘cute’ art style, so we knew the game would look better if they felt comfortable drawing it. So we tried to look up gameplay ideas for the characters that matched their style best.”

Giving Xena the starring role in an ethereal deathmatch

Xena: Trial of the Gods is a top-down, hack-and-slash game. You play as Zena, supported by an ever-growing team of freed villagers, trying to survive waves monster attacks – to amuse the Greek gods who organised the event out of sheer boredom. The game can be played solo or co-op.

The judges praised its cute art style, its innovative gameplay and the way it evoked the ‘strength in numbers’ theme.

It turns out the game’s concept came from an eclectic mix of inspirations. Andrei said: “The waves idea was a bit inspired by Vampire Survivors – a game that had just came out. The gods’ trickery and favors were inspired by Hades, and the graphics were inspired by Juicy Realm.”

But that’s not to say Andrei and his team decided on their concept quickly. It was quite the opposite: “Everyone started throwing random ideas onto a whiteboard. We actually had more than 20 ideas involving every single IP. After our creativity ran out, we picked the most interesting and creative ones and started improving on that idea, going a bit deeper on the core gameplay loop and features. There were two things we absolutely wanted in the game: it had to be co-op and the leaderboards had to make sense.”

“We had this idea of defending yourself against waves of Graboids from Tremors. It changed a lot during long discussions. Eventually, we came up with the idea of Xena saving villagers that were captured by bandits, this idea matched the “strength in numbers” theme. So we mixed both ideas and put the Gods of Olympus that matched Xena lore as a way to randomize the gameplay a bit.”

“When I asked the team what we were most proud of, they all said the same thing: the polish and juiciness. Every day we would play the game a few times and take notes on all aspects that could be improved. The jam version was build number 13!”

Getting to know the brilliant Brazilians

The SheePixel team has four members, all from Rio Grande do Sul, Brazil. They are:

They met in college, but they don’t see their formal education as the main source of their game-making skills.

“We all went to the same college, to study “Digital Games” at UNISINOS in 2012,” Andrei told us. “Only Elias was able to finish – the rest of us all dropped out. After dropping out, we learned a lot by ourselves. The internet is a sea of knowledge, you just have to know how to navigate it. Every day there are new sources of information and new guides being made, so we kept challenging ourselves and learning through the years.”

“It’s been ten years of friendship. We developed a few games with different teams in the beginning, competing with each other during college competitions. After college, we tried to develop games with huge scopes that we didn’t have enough experience to make, and we participated in a few jams. We’ve been together as a team for around seven years now.”

We asked the team to name the games that have influenced them the most. The answers we got were three very different games.

“For me, it’s Ragnarok Online,” says Andrei. “I’ve always been a fan of MMORPGs, from Tibia to New World, but Ragnarok Online was part of my teenage years and I’ll never forget it. It just never got boring for me. Plus the music is so good, I still listen to it today when I need to relax.”

“I asked my teammates about their games. For Elias, it’s Nier Automata – beautiful story and juicy gameplay. For Lívia, the Persona series. For Nicolas, it’s the Monster Hunter series.”

At LootLocker, we didn’t just help to organise the game jam – a lot of the participants used our tools to make their games. And the SheePixel team was one of them. They used guest login, white label login and multiple leaderboards with custom data to know if each player was playing alone or co-op.

Andrei said they’ll absolutely be using LootLocker again. “After understanding all of LootLocker’s features, we noticed it’s clearly designed with the most modern types of game organization and monetization in mind. Systems that are a headache to implement and maintain are so easy to manage through the web management console. The free tier is quite generous and doesn’t limit anything, so it’s perfect for any small studio to elevate their game to the next level.” 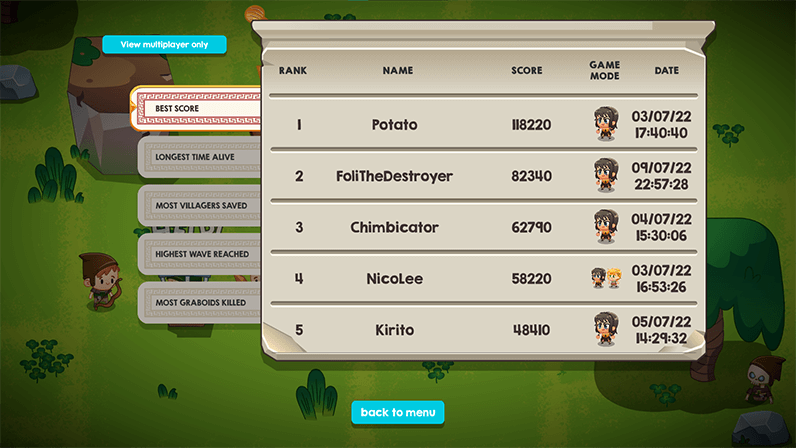 Everyone at LootLocker congratulates the SheePixel team for their well-deserved first place at Together Jam. We’re delighted to have contributed in this small way. We’ll be looking forward to playing their next game.

Looking for a way to elevate your game to the next level?

We specialize in the more functional, less fun, parts of making games. Leaderboards, asset management, user-generated content, leveling systems – LootLocker makes all these things quick and easy, so you can focus on the more creative parts of your game. LootLocker works straight out of the box too, no matter your game's size, genre, engine or platform.

If you have any questions, we’d love for you to get in touch with us.